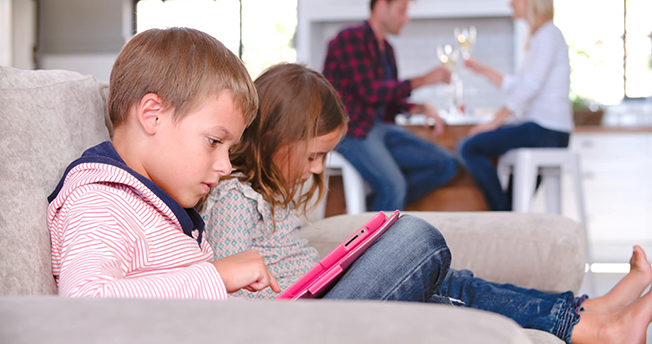 Children and technology are practically inseparable these days. Whether for educational purposes or just fun, children are spending a good portion of their day on “screen time” — staring at the LED screens of computers, tablets, smartphones and other digital devices.

According to Common Sense Media, children under age 8 now spend more than two hours a day with screen media. For 8- to 10-year-olds, screen time triples to six hours a day. And it’s not unusual for kids in middle school and high school to spend up to nine hours per day looking at digital displays.

If you’re wondering if all this screen time might cause problems for your child’s eyes and vision, the short answer is, “yes, it does.”

Risks associated with too much screen time

Children who spend multiple hours staring at digital devices are at risk of developing these vision-related problems:

Computer vision syndrome— also called digital eye strain — is a condition that’s caused by visual stress and has a combination of symptoms, including fluctuating vision, tired eyes, dry eyes, headache and fatigue. Other non-visual symptoms of CVS include neck, back and shoulder pain.

When using a computer or digital device for prolonged periods, it’s common to start slouching inward, rounding the back and shoulders, and then tilt the head back and jut the chin forward. This unnatural (and unhealthy) posture — called “turtling” — leads to many of the non-visual symptoms of computer vision syndrome. 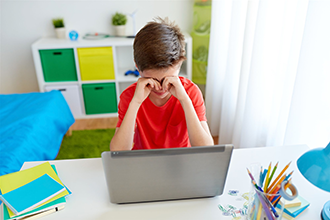 Digital devices such as tablets can cause eye strain in kids, so monitor their use as well as that of desktops and laptops.

Vision researchers believe increased screen time among children is a significant risk factor for the development and progression of nearsightedness (also called myopia). The prevalence of myopia has grown significantly in the last few decades and this trend coincides with the increased use of computers and digital devices by children.

High-energy visible light called blue light is emitted by the LED screens of computers, tablets, smartphones and other digital devices. Although the most significant source of blue light exposure is natural sunlight, many researchers and eye doctors are concerned that the added blue light exposure from computers and digital devices might increase a person’s risk of age-related eye diseases like macular degeneration later in life.

It’s unrealistic to think that children will stop using modern technology. Thankfully, there are some easy things you can do to decrease your child’s risk of eye and vision problems from prolonged use of computers and digital devices.

It may sound simplistic, but one of the best things you can do for your child is to get them to follow the “20-20-20” rule — every 20 minutes, take your eyes off your screen and look at something that’s at least 20 feet away for at least 20 seconds. This simple task relaxes the focusing and eye alignment muscles, reducing the risk of many of the symptoms of digital eye strain.

The 20-20-20 rule also might decrease the risk of myopia progression. Some research suggests focusing fatigue may be associated with the onset and worsening of myopia. Taking frequent breaks from staring at digital screens helps reduce this fatigue.

The time taken to follow the 20-20-20 rule is also a good time to sit up straight and realign the head, neck and shoulders. Moving the head slowly to the right and left and also up and down can relieve strained muscles and reduce fatigue. If it’s possible, getting up to walk and stretch the entire body also is a good idea to reduce the risk of non-visual symptoms of computer vision syndrome.

One solution is to purchase eyeglasses with lenses that reduce the amount of blue light that enters the eyes from computer, e-tablet and smartphone screens. A number of lens manufacturers produce eyeglass lenses that filter blue light.

The sun emits much more blue light than digital devices. All kids should wear sunglasses outdoors to reduce their lifetime exposure to harmful blue light.

Another option is to have an anti-reflective coating that blocks blue light applied to the lenses.

A third option is to purchase glasses with photochromic lenses. These sun-sensitive lenses block some blue light indoors and have the added advantage of automatically blocking additional blue light from the sun outdoors without the need for a separate pair of prescription sunglasses.

Yet another option — and the best option for superior protection from harmful blue light from the sun — is a pair of polarized sunglasses for outdoor wear.

But what if your child doesn’t need prescription glasses? The most convenient option in this case is to purchase a protective blue light filter that can be applied to the surface of your child’s digital devices. Examples include InvisibleShield Glass+ VisionGuard screen protectors from ZAGG.

Also, remember to use the blue light filtering features on certain devices (like Apple’s Night Shift), or multi-platform apps that block blue light, such as f.lux and Iris.

The American Academy of Pediatrics advises parents to establish media-free times each day to break their children’s fixation on digital device and spend time to connect as a family. These times have the added benefit of reducing eye fatigue and blue light exposure.

Finally, schedule a comprehensive eye exam for your children prior to the start of every school year. In addition to making sure your child’s eyes are healthy and seeing well, your eye doctor can perform special tests and provide specific suggestions to reduce the risk and symptoms of computer eye strain.

Children and technology are the future. Taking these simple measures can go a long way toward keeping your tech-savvy child seeing clearly and comfortably for years to come.